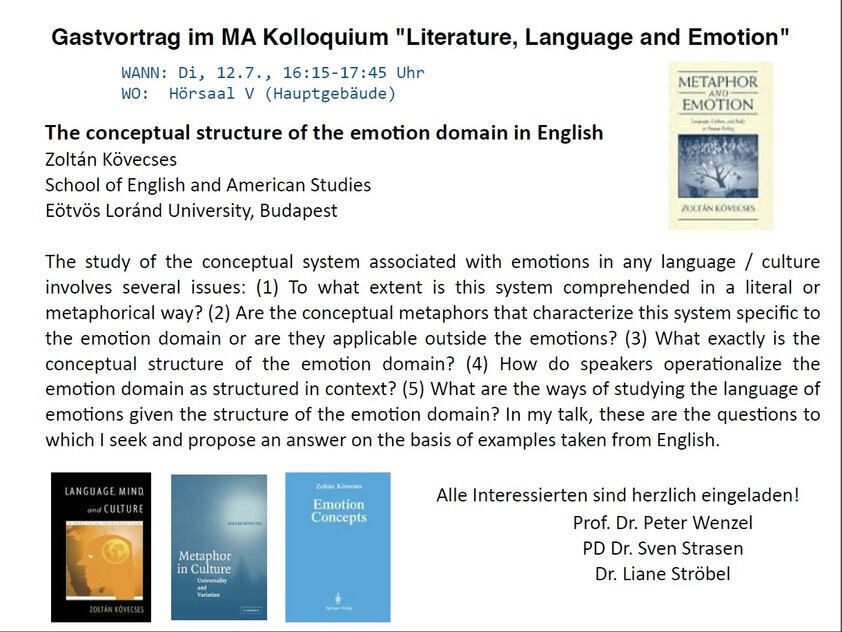 We are delighted to announce a guest lecture by renowned linguistic Zoltán Kövecses, who will speak about "The conceptual structure of the emotion domain in English" as part of our MA research colloquium on emotion.

Zoltán Kövecses is Professor of Linguistics in the Department of American Studies at Eötvös Loránd University, Budapest. He received his M.A. from Eötvös Loránd University, Budapest, in 1972 and his Ph.D. and D.Sc. from the Hungarian Academy of Sciences in 1988 and 1996. His main research interests include the conceptualization of emotions, the study of metaphor and idiomaticity, the relationship between language, mind and culture, and American slang and American English. Zoltán Kövecses is one of the four editors of the international scholarly journal, Metaphor and Symbol. He also serves on the advisory board of Cognitive Linguistics. He is currently working on the language and conceptualization of emotions, cross-cultural variation in metaphor, and the issue of the relationship between language, mind, and culture from a cognitive linguistic perspective.

Zoltán Kövecses has lectured widely as an invited plenary speaker at various international conferences and he has received several scholarships. His seminal works are Where Metaphors Come From: Reconsidering Context in Metaphor (2015), Ten Lectures on Figurative Meaning-Making: The Role of Body and Context (2012), Metaphor: A Practical Introduction (2010, currently in its 2nd ed), Language, Mind, and Culture (2006), Metaphor in Culture. Universality and Variation (2005) and Metaphor and Emotion. Language, Culture, and Body in Human Feeling (2000).